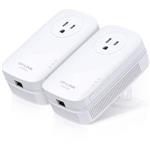 mimo technology with beamforming maximizes the performance on the independent streams, which improves coverage throughout the home, particularly for previously hard to reach outlets. mimo technology means the tl-pa8010p kit can use the 3 wires, including the live, neutral and earth to create multiple data paths, meaning that you benefit from faster data throughput and more stable connections.

gigabit port for ultra-fast datasheet transfer with one gigabit ethernet port, tl-pa8010p allows users to connect a bandwidth intensive device to the internet at high speeds and ensures the smooth transmission of ultra hd video streaming. this makes the tl-pa8010p kit the perfect home entertainment companion.

plug and play, no configuration required connect a powerline adapter to the router; plug another powerline adapter into a wall socket in another room, and connect it to your internet enabled device via ethernet - and you're done!

extra power socket for additional devices the integrated power socket, with power output of up to 16a, means the powerline can be used like a traditional electrical socket. simply plug in your device or extension lead as though it were a normal wall socket. the built-in noise filter also helps to prevent electrical signal noise from affecting powerline performance.

power save by up to 85% tl-pa8010p is a new-generation of powerline adapter. its sophisticated power-saving mode automatically switches from its regular "working" mode to "power-saving" mode reducing energy consumption by up to 85%.

Every effort has been made to ensure the accuracy of all information contained herein. e-nitiative shall not be liable for any changes resulting in wrong product description, tax code and/or price. The shown information (specifications, prices, taxes) should be considered as an indication and can be changed at any moment and without any prior notice.

Design and development by

These cookies ensure that the webstore functions properly. Think of keeping track of your language and your products in your shopping basked, log on with your account, the checkout form, filter search results etc.

We use analytical and tracking cookies to see how we can improve the webstore and how we can adapt content and potential advertisements to your preference.